The San Diego Bay Watershed Management Area (WMA) is estimated to be home to approximately one-third of the population of San Diego County. It is the largest WMA located entirely within the boundaries of San Diego County and includes three major subwatersheds: Pueblo San Diego, Sweetwater, and Otay.

The San Diego Bay WMA supplies many local residents with potable water sourced from one of four reservoirs: the Sweetwater, Loveland, and Upper and Lower Otay reservoirs.  Other major water bodies include the Sweetwater River, Otay River, and Chollas Creek.  San Diego Bay and rivers, creeks, and lakes in the watershed support swimming, fishing, biking, walking, and other recreational activities.

The San Diego Bay WMA also hosts a variety of unique and diverse ecosystems that act as critical habitat for a number of endangered and threatened species, including the California gnatcatcher, southwestern willow flycatcher, Quino checkerspot butterfly, and California red-legged frog.

Agencies involved in the development of the San Diego Bay Water Quality Improvement Plan (WQIP) include the Cities of of Chula Vista, Coronado, Imperial Beach, La Mesa, Lemon Grove, National City, and San Diego; the County of San Diego; the San Diego County Regional Airport Authority; and the San Diego Unified Port District. The WQIP is a requirement of updated stormwater regulations adopted by the Regional Water Quality Control Board (Regional Board) according to Order No. R9-2013-0001, as amended by Order Nos. R9 2015-0001 and R9-2015-0100. The ultimate goal of the WQIP is to protect, preserve, enhance, and restore water quality of receiving water bodies. These improvements in water quality will be accomplished through an adaptive planning and management process that identifies the highest priority water quality conditions within the watershed and implements strategies to address them.

The San Diego Bay Watershed Management Area (WMA) Water Quality Improvement Plan (WQIP) Annual Reports provide information about progress made towards achieving water quality goals, actions taken to make progress toward the goals, and monitoring results. Where applicable, adaptive management of highest priorities and goals/strategies and other updates to the WQIP are described in Annual Reports.

The Regional Stormwater Permit (Order No. R9-2013-0001, as amended by Order Nos. R9-2015-0001 and R9-2015-0100) requires that the San Diego Region Copermittees provide access to their Jurisdictional Runoff Management Program documents on a Regional Clearinghouse website. The purpose of JRMP documents are to guide implementation of programs and strategies to reduce pollutants discharged from each Copermittee’s storm drain system to receiving waters. The JRMPs for Copermittees in the San Diego Bay WMA and GIS files used to prepare maps included in the JRMPs are available via the links below.

The BMP Design Manuals for each Copermittee involved in the San Diego Bay WMA are linked to below:

A requirement of the Municipal Permit Order No. 2013-0001 (as amended in Order Nos. R9-2015-0001 and R9-2015-0100), transitional monitoring was conducted and reported on prior to development of the Otay WQIP. The reports, appendices, and associated documents can be found below:

As part of the WQIP Longer-Term TMDL Goals, regional Copermittees have completed special studies on bacteria, such as how bacteria levels occur naturally in the environment and may relate to surfer health. These studies were presented to the San Diego Water Board in the Report of Waste Discharge (submitted in December 2017) as part of the TMDL reopener process, in which TMDL standards will be reevaluated in light of the most recent science.

When excessive quantities of pollutants are deposited into these water bodies, they may inhibit many or all of these beneficial uses and can result in actions such as beach closures and postings, etc. The most significant sources of pollutants impacting the above beneficial uses include urban and agricultural runoff, resource extraction, septic systems, and marinas and boating activities.

Under Section 303(d) of the Clean Water Act, Chollas Creek of the Pueblo Hydrologic Unit, was identified as impaired for a number of constituents including bacteria and metals, which are required to be addressed through a number of best management practices and regular monitoring. As such, National Pollutant Discharge Elimination System (NPDES) Permit copermittees (also referred to as Responsible Agencies (RAs)) focus their treatment and cleanup efforts on this particular water quality condition.

As part of the process, however, copermittees are required to develop a comprehensive Water Quality Improvement Plan (WQIP) for the WMA that identifies highest priority water quality conditions, strategies to address them, and monitoring plans. The WQIP and associated Annual Reports are required by Order No. R9-2013-0001 as amended by Order Nos. R9-2015-0001 and R9-2015-0100 and pertain specifically to improving the quality of both storm water and non-storm water discharged by copermittees’ municipal separate storm sewer systems. 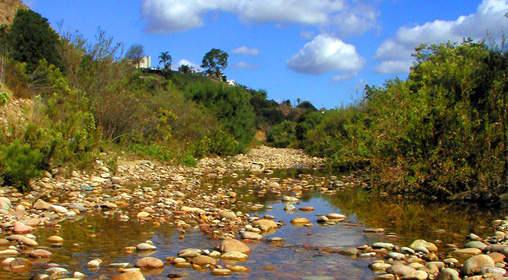 Unlike Sweetwater and Otay watersheds, Pueblo San Diego has no central stream system and instead consists primarily of a group of relatively small local creeks and pipe conveyances, many of which are concrete-lined and drain directly into San Diego Bay. Major water features in the Pueblo San Diego Hydrologic Unit include Chollas Creek, Paleta Creek, and San Diego Bay. Chollas Lake, located towards the northeastern corner of the watershed was once used to supplement the drinking water supply, but is now used principally as a recreational area. Considered one of a kind in San Diego County, Chollas Lake now serves as a youth fishing lake.

Also contained within the Pueblo San Diego Hydrologic Unit is the Point Loma Ecological Reserve, a 650 acre coastal park located near the tip of the Point Loma peninsula. Visitors to the Reserve have observed a number of federally- and state-endangered species, including the Orcutt’s spine flower and the threatened California gnatcatcher. Nearby, the 1200 acre Balboa Park draws in multitudes of tourists from around the country and the world. Not far from the skyscrapers of downtown San Diego, it chiefly serves as a cultural park and contains a wide array of hiking trails, open spaces, museums, and gardens.

The hydrologic unit is the most developed, and with nearly 500,000 residents, is the most densely populated watershed in the San Diego Bay WMA (2010 U.S. Census). About seventy-five percent (75%) of the watershed is developed, but the dominant land use remains relatively consistent between hydrologic areas. Residential areas are the primary land use in all three of its hydrologic areas, comprising thirty-two percent (32%), forty percent (40%), and forty-six percent (46%) of the total land area of the Point Loma, San Diego Mesa, and National City Hydrologic Areas, respectively.

The watershed has four major water bodies: Sweetwater River, Sweetwater Reservoir, Loveland Reservoir, and San Diego Bay. Portions of the San Diego Bay National Wildlife Refuge, including the Sweetwater Marsh, are contained within the Sweetwater Hydrologic Unit and provide prized habitat to a number of endangered and threatened species, like the California least tern and the belted kingfisher. Further upstream, much of the watershed is occupied by undeveloped lands in the Cleveland National Forest, Cuyamaca Rancho State Park, and the unincorporated communities of Pine Valley, Descanso, Alpine, and the Viejas Indian Reservation. The Cleveland National Forest, Cuyamaca Rancho State Park, and Viejas Indian Reservation are regulated separately and copermittees do not have authority to require their participation or to implement NPDES Permit requirements.

Estimates place the current population of the Sweetwater Hydrologic Unit at around 340,000 (2010 U.S. Census), most of them concentrated in the lower watershed. Nevertheless, over half of the watershed is undeveloped and open space lands (60%). On an hydrologic area basis, the Lower Sweetwater is the most urbanized, with residential areas leading at forty-four percent (44%), followed by transportation at eighteen percent (18%) of land area. Undeveloped and open space lands dominate the majority of the area within the Middle and Upper Sweetwater Hydrologic Areas, making up sixty-three percent (63%) and eighty-two percent (82%), respectively. Residential land uses followed in each of the hydrologic areas, with twenty-eight percent (28%) and twelve percent (12%) of the total in each of the Middle and Upper Sweetwater Hydrologic Areas. Additional contributing land uses include transportation and commercial and industrial businesses.

Of the three San Diego Bay hydrologic units, the Otay Hydrologic Unit has been identified by the Basin Plan as the second largest, comprising nearly 98,500 acres of land. The Otay Hydrologic Unit can be further broken down into three distinct hydrologic areas, each with unique geological and environmental features: Coronado (910.1), Otay Valley (910.2), and Dulzura (910.3). Spreading over a relatively large land area, copermittees to the National Pollutant Discharge Elimination System (NPDES) Permit include the County of San Diego and the Cities of Imperial Beach, Coronado, National City, Chula Vista, and San Diego.

On a much smaller scale, the layout of the watershed resembles that of the Sweetwater Hydrologic Unit, containing one central creek that collects and conveys the majority of the watershed’s surface runoff. Moreover, the Otay Hydrologic Unit contains four major water bodies: the Upper and Lower Otay Reservoirs, Otay River, and San Diego Bay. In addition to supplying potable drinking water to area residents, the reservoirs and the land immediately surrounding them act as habitat to native wildlife and allow for a myriad of recreational opportunities. From an ecological standpoint, the Otay Hydrologic Unit is inclusive of portions of the San Diego Bay National Wildlife Refuge, the Rancho Jamul Ecological Reserve, and the Otay Valley Regional Park. In combination with the San Diego County Multiple Species Conservation Program, which impacts over 23,000 acres, these natural areas provide habitat to many native Southern Californian endangered plant and animal species.

The U.S. Census estimated in 2010 that the Otay Watershed is home to just over 200,000 individuals. Land in the area is primarily composed of undeveloped and open spaces, which make up roughly sixty-eight percent (68%) of the watershed as a whole. However, land uses within the Otay Hydrologic Unit vary extensively by hydrologic area. For example, in the Coronado Hydrologic Area, where military uses overshadow other land uses at fifty-two percent (52%), open space and undeveloped lands only comprise three percent (3%) of the land area. In Otay Valley and Dulzura Hydrologic Areas, however, open spaces and undeveloped lands dominate, making up forty-seven percent (47%) and eighty-three percent (83%) of land area, respectively. In each of those hydrologic areas, residential land uses follow with sixteen percent (16%) and eighteen percent (18%) of land area, trailed by transportation, and industrial and institutional uses.