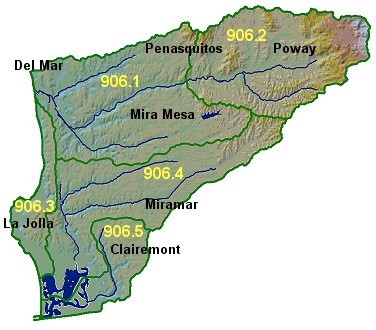 The Los Peñasquitos Watershed Management Area (WMA) encompasses a land area of 94 square miles, making it the second smallest WMA in San Diego County. It lies in the central portion of San Diego County and neighbors the San Dieguito River Watershed to the north and the Mission Bay/La Jolla and San Diego River WMAs to the south.

Functionally, the Los Peñasquitos WMA works in conjunction with the Mission Bay/La Jolla WMA to form a single hydrologic unit, or watershed. For the purposes of this summary, however, they will be considered distinct entities.

The Los Peñasquitos WMA can be divided into two distinct hydrological areas, each with unique geological and environmental features:

Rainfall to the area primarily drains through Los Peñasquitos Creek, which stretches east to west and originates near the City of Poway. The creek eventually discharges to the Pacific Ocean near the community of Del Mar at the Los Peñasquitos Lagoon. The WMA also supplies locals with potable water sourced from Miramar Reservoir, owned and operated by the City of San Diego.

Currently, about forty-six percent (46%) of the WMA remains undeveloped or has otherwise been dedicated to open space and recreational lands. The remaining fifty-four percent (54%) of the land area is being utilized as residential areas (27%), roadways and transportation (12%), and other uses (15%). The remaining ‘other’ fifteen percent (15%) includes industrial, office, commercial, and agricultural land uses. For more detailed breakdowns by hydrologic area, please see the Los Peñasquitos and Poway Hydrologic Area sections below.

According to 2010 U.S. Census data, the Los Peñasquitos WMA is estimated to be home to approximately 260,000 residents. The population is most dense in the more developed urban and suburban regions of the lower watershed, which bears a disproportionate share of the pollution burden when compared to portions of the watershed upstream. As such, the watershed suffers from several pollutants, which have the potential to negatively impact how residents, business-owners, and tourists use and interact with local water bodies.

It is important to note, however, that the watershed serves more than just humans. The Los Peñasquitos Watershed consists of a variety of unique and diverse ecosystems that act as critical habitat for a number of endangered species.

Agencies involved in the development of the Los Penasquitos Water Quality Improvement Plan (WQIP) include the Cities of San Diego, Del Mar and Poway, the County of San Diego, and the California Department of Transportation. The WQIP is a requirement of updated stormwater regulations adopted by the Regional Water Quality Control Board (Regional Board) according to Order No. R9-2013-0001, as amended by Order Nos. R9 2015-0001 and R9-2015-0100. The ultimate goal of the WQIP is to protect, preserve, enhance, and restore water quality of receiving water bodies. These improvements in water quality will be accomplished through an adaptive planning and management process that identifies the highest priority water quality conditions within the watershed and implements strategies to address them.

The Los Peñasquitos Watershed Management Area (WMA) Water Quality Improvement Plan (WQIP) Annual Reports allow copermittees to demonstrate progress made during the fiscal year towards achieving water quality goals. They are a direct requirement of the National Pollutant Discharge Elimination System (NPDES) Permit, Order No. R9-2013-0001, as amended by Order Nos. R9-2015-0001 and R9-2015-0100. The Annual Reports contain specific information regarding strategy implementation and monitoring efforts and data. Furthermore, they serve as a basis upon which copermittees may choose to adaptively manage their highest priorities and goals/strategies, according to the most recent water quality data.

The Regional Stormwater Permit (Order No. R9-2013-0001, as amended by Order Nos. R9-2015-0001 and R9-2015-0100) requires that the San Diego Region Copermittees provide access to their Jurisdictional Runoff Management Program documents on a Regional Clearinghouse website. The purpose of JRMP documents are to guide implementation of programs and strategies to reduce pollutants discharged from each Copermittee’s storm drain system to receiving waters. The JRMPs for each Copermittee involved in the Los Peñasquitos WMA are linked to below.

The BMP Design Manuals for each Copermittee involved in the Los Penasquitos WMA are linked to below:

A requirement of the Municipal Permit Order No. 2013-0001 (as amended in Order Nos. R9-2015-0001 and R9-2015-0100), transitional monitoring was conducted and reported on prior to development of the Los Penasquitos WQIP. The reports, appendices, and associated documents can be found below:

When excessive quantities of pollutants are deposited into these water bodies, they may inhibit many or all of these beneficial uses and can result in actions such as beach closures and postings, etc. Within the Los Peñasquitos WMA, these pollutants are sourced primarily from urban runoff, sewage spills, dredging, and landfill leachate.

Under Section 303(d) of the Clean Water Act, the Pacific Ocean Shoreline was identified as impaired for indicator bacteria, which is required to be addressed through a number of best management practices and regular monitoring. Sedimentation and siltation also poses a problem for the lagoon. As such, copermittees (also referred to as Responsible Agencies (RAs)) focus their treatment and cleanup efforts on this particular water quality condition.

Copermittees are required to develop a comprehensive Water Quality Improvement Plan (WQIP) for the WMA that identifies highest priority water quality conditions, strategies to address them, and monitoring plans. The WQIP and associated Annual Reports are required by Order No. R9-2013-0001 as amended by Order Nos. R9-2015-0001 and R9-2015-0100 and pertain specifically to improving the quality of both storm water and non-storm water discharged by copermittees’ municipal separate storm sewer systems. In the Los Peñasquitos WMA, copermittees include the County of San Diego and the Cities of San Diego, Del Mar, and Poway.

Additionally, these agencies collaborate with Caltrans in implementing the WQIP. The final WQIP for the Los Peñasquitos WMA was submitted to the Regional Water Quality Control Board and was accepted in February 2016. Copermittees have chosen to focus their treatment and cleanup efforts on bacteria along the Pacific Coast Shoreline and siltation and sedimentation in Los Peñasquitos Lagoon, conditions which have been classified as highest priority water quality conditions. 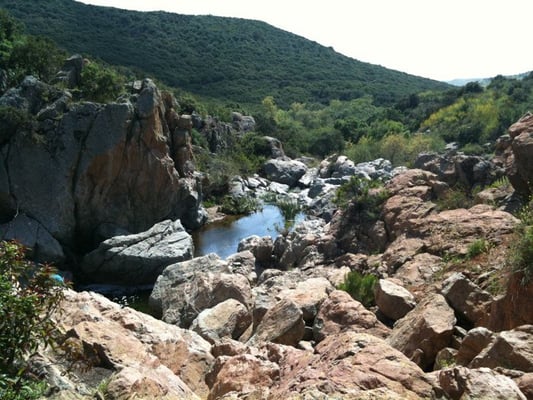 The system includes a number of noteworthy water bodies, such as Los Peñasquitos Creek, Carmel Valley Creek, and Carroll Canyon Creek, all of which feed into Los Peñasquitos Lagoon. Marking the point at which Los Penasquitos Creek meets the Pacific Ocean, Los Peñasquitos Lagoon is comprised of a range of ecologically and environmentally sensitive areas. For example, it is home to the Los Peñasquitos Marsh Natural Preserve, a portion of the Torrey Pines State Natural Reserve that is closed to boating and is open to hikers only on a limited basis. Much like other Southern California estuaries and lagoons, it provides habitat to a number of endangered species, largely of the avian variety.

In the upper reaches of the system, just below the Poway Hydrologic Area, is Miramar Reservoir. Completed as a part of the City of San Diego’s Aqueduct project in 1960, the reservoir has a maximum storage capacity of about 7,000 cubic acre-feet and contains water sourced from the Colorado River and California Aqueducts.1

The Los Peñasquitos system contains relatively large swaths of undeveloped land. In fact, about forty-one percent (41%) of its land area is currently undeveloped or open space, and about twenty-six percent (26%) of the hydrologic area is being utilized for residential land uses. The remaining land area is divided between transportation (15%), industrial (10%), and miscellaneous land uses (8%).

Partially as a result of development, several water bodies were listed as impaired as required by Section 303(d) of the Clean Water Act. In the Los Peñasquitos Hydrologic Area, Los Peñasquitos Creek was listed as impacted by Enterococcus bacteria, fecal coliform bacteria, selenium, total dissolved solids, total nitrogen as N, and aquatic toxicity. In addition, the lagoon is affected by sedimentation and siltation. 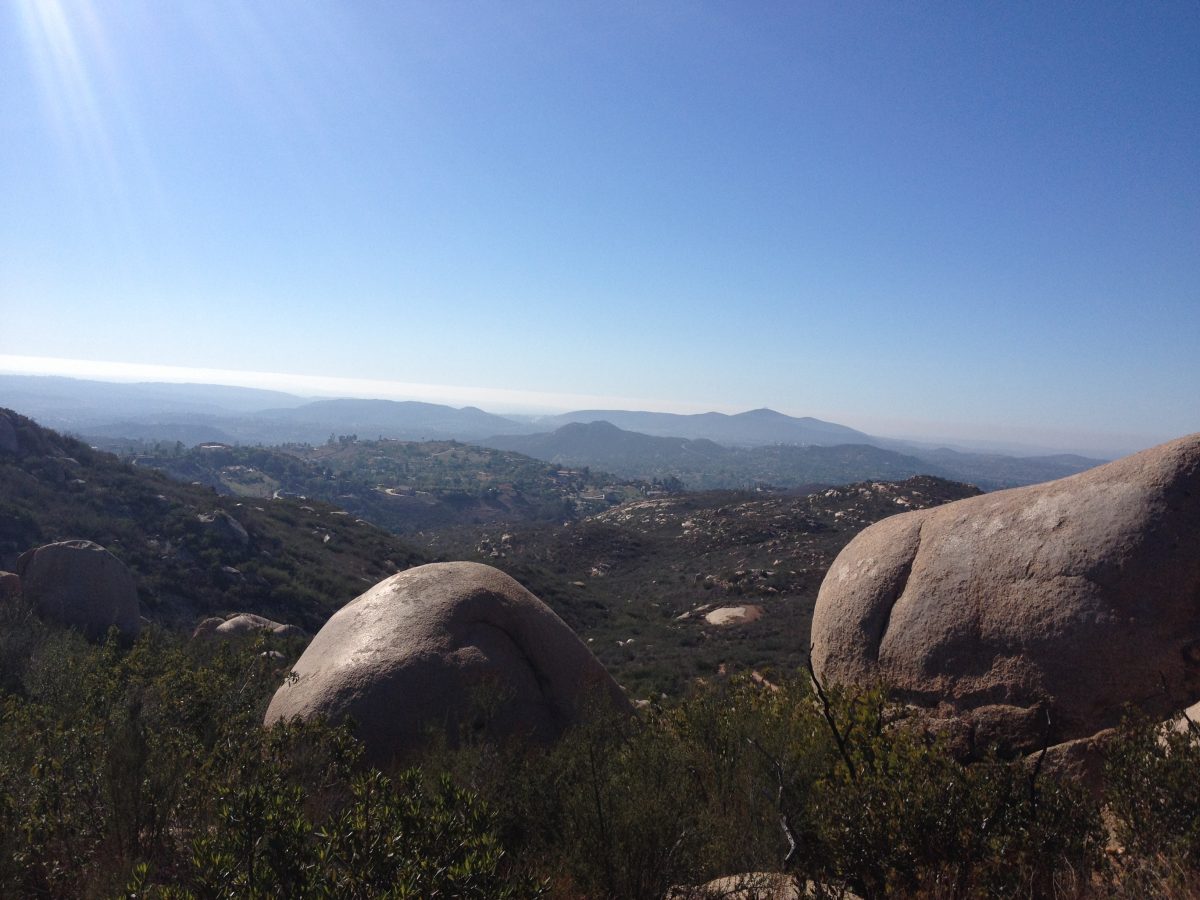 Beginning in the rolling hills just east of the City of Poway and stretching westward, the Poway Hydrologic Area covers a land area of approximately 27,000 acres. Copermittees include the County of San Diego and the Cities of San Diego and Poway.

Land uses in this portion of the WMA tend to be more variable than in the Los Peñasquitos Hydrologic Area. One of the most recent figures estimates that the Poway Hydrologic Area is fairly evenly divided between residential land uses (33%), open spaces and undeveloped lands (27%), and miscellaneous uses (40%). The forty percent (40%) comprising the miscellaneous uses includes lands utilized for roadways and transportation (10%), industrial and commercial lands, office space, etc.

A single water body in the Poway Hydrologic Area, Poway Creek, has been listed as impaired under Section (303)d of the Clean Water Act for high levels of selenium and aquatic toxicity. These issues are currently being addressed by copermittees through a number of best management practices (BMPs).